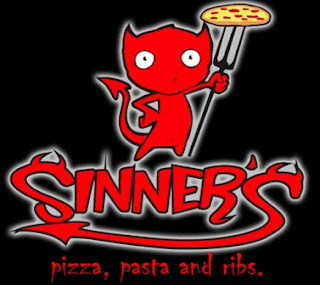 Jesus famously said that he came to call sinners, not the righteous, but who did he mean by that?

To 20th-Century churchgoers the answer would have been obvious: sinners are the bad and the wicked, especially those whose wrong-doing has something to do with sex or the ten commandments. To early 21st-Century non-churchgoers sin is more of a marketing term, implying luxury and indulgence, with a hint of defiance against overweening authority.

In Biblical times the meaning was quite different. In contrast to the righteous, the δικαίους, who followed the rules and fitted into the framework of their society, sinners, the ἁμαρτωλούς, were those who had missed the mark, not kept to their society's rules. In the case of the Jews this was all about the covenant on Mount Sinai, and being God's people.

The book of Exodus tells of that covenant: God told the Israelites that if they followed his commands he would be their God and they would be his people. It was a contract, with definite terms and conditions.

A large part of the rest of the Old Testament tells of how the Israelites failed, again and again, to keep their side of the bargain. Eventually God withdrew his protection and the nation of Israel was driven out by the Assyrians; later Judea was taken into exile by the Babylonians. The Jews (aka Judeans) eventually returned to their lands, the inhabitants of the northern kingdom, Israel, never really did (there is some confusion about the status of the Samaritans, who claimed to be descendants of these Israelites although the Jews denied this).

Although the Jews (many of them) returned to their lands, they never really had control over them: Persians, Greeks and then Romans claimed authority instead. So, we can tell from documents from Jesus' time and earlier found over the past few decades, they decided that the exile was, in a sense, still ongoing. That God and his chosen king would eventually come and truly establish God's Kingdom of justice and freedom and peace ... at least for the Jews.

Part of this development was the idea that it wasn't enough to be a Jew to be one of God's people - you had to be a righteous Jew: one who truly follows all the conditions of that Sinai covenant. If you kept all the rules of the Law you were included in that promised Kingdom; if you missed the mark, failed to keep the terms of the contract, then you were a sinner, outside the Kingdom.

The trouble was that the religious authorities, who determined how those terms and conditions should be applied, interpreted them on their own terms. So, oddly enough, those who behaved religiously would be declared righteous, those who had to get on with normal life would find themselves being declared sinners, missing the mark and falling outside the covenant.

For example, their interpretation of the food laws effectively meant that Jews were not allowed to eat at the homes of Gentiles. At a time when Gentiles are in charge, that means that anyone working with the Romans or Greeks would soon be either out of a job - as eating together was an important part of the way that these relationships worked - or would be declared a sinner.

Similarly, anyone caring for the sick on a regular basis would soon find themselves doing or touching something they shouldn't, just as part of living. And anyone who actually was chronically sick - for instance the woman in the story who suffered from a long term haemorrhage - was excluded almost by definition.

People were excluded from God's Kingdom effectively because they were not rich and privileged enough to follow the lifestyle set as the target by the privileged religious leaders.

You begin to see why Jesus got so angry, perhaps?

There is an enormous amount of good in the Old Testament, including much that was amazingly progressive for its day. But the people in leadership, the ones who were supposed to make it work, instead abused and exploited their people in the name of God and of His covenant. A new approach was needed.

Jesus died on a cross, and rose again, in order that all those who could not qualify for membership of God's Kingdom under the old contract could take out a new one instead. A new contract which doesn't depend on following rules, but on following Jesus, and which focuses on including all who are willing to turn to God in order to be made new, and on welcoming the previously excluded into the family of God's people.

I just wish that today's religious leaders would properly come to terms with this.