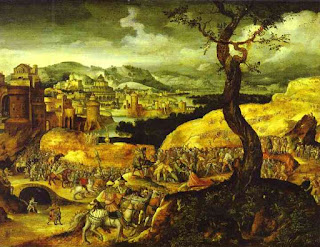 "You are the Messiah," says Peter, but promptly loses the plot when Jesus talks about dying.

Jesus has been proclaiming good news to the poor, has been gathering in the lost and the outcast, has cast out demons and healed the sick, and has provoked reactions wherever he went. Pretty convincing behaviour for a prophet and a holy man.

But Jesus has also calmed a storm, fed five thousand with five loaves and a couple of fish, then walked across a lake and fed four thousand more with seven loaves and a few small fish. What sort of prophet does these things? The disciples were confused and didn't understand. Then Peter makes a mental leap.

At once Jesus' mission changes direction, and the pace drops. Now Jesus is headed toward Jerusalem and to death. Poor old Peter is left bewildered again. “Get behind me, Satan!” seem harsh, but maybe something strong was needed to start to get past Peter’s mental block?

Peter thought he'd got it sussed: he knew what the story was now, and where things were going. When Jesus goes off in another direction he is lost and confused.

Mark was writing for readers who were lost and confused. Their world had turned upside down: in persecution, rebellion and civil war there seemed to be no justice, no peace, no hope. What comfort could Mark offer them? Or us?

What Mark offers is mystery. A mountaintop experience, where Jesus is joined by Moses and Elijah - symbolising the Law and the Prophets fulfilled in Jesus. God's voice again comes down affirming Jesus, this time for the disciples to hear too: “This is my beloved Son, listen to him!”

Jesus is not starting a new religion. What he is doing reveals the proper understanding of the Hebrew scriptures. The Scribes and the Pharisees had lost their way; Jesus calls them, and us, to a true understanding of what following God means. And part of that understanding involves dying to the old and being raised for the new.

Part of that ‘new’ is a new approach to importance, to status and power. “Who is the greatest?” The one who seems least and serves most is the greatest!

What sort of Messiah, of King, is Jesus? Maybe more to the point, how much regard and reputation can his followers expect. Status, respect, authority – the disciples weren't the only religious leaders to want such things; now they are being told the price.

Just as the one who seeks their own life will lose it, so the person who seeks status and authority will not be important in God’s eyes and in God’s kingdom. It is only those who throw away such things who will gain them.

Mark is generally believed to have got the material for this Gospel from Peter, several years later. Maybe the way Mark portrays the disciples' confusion, and Peter's continual cluelessness, reflects that Peter has finally learnt this lesson. How happy are we to look like idiots, if it helps others see more clearly?

The first half of Mark leads us to this point of confused recognition; from here onward the road leads to suffering and death ... and beyond that to new life.

Maybe this was hope for the suffering Christian community in the late 60's AD; maybe it is hope for us now when life goes badly wrong. But that hope remains shrouded in mystery and confusion.
Posted by BlackPhi at 14:12