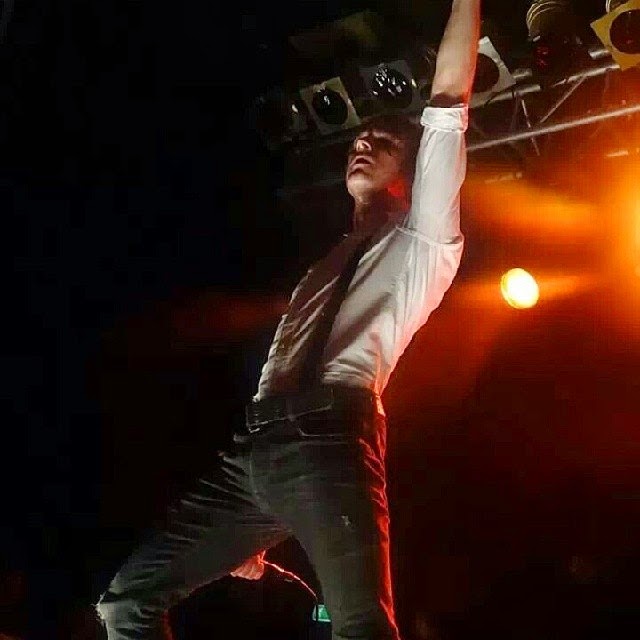 I'm not quite sure what I did, but somehow I mangled my back the weekend before last, leaving me unable to drive for part of last week. That was unfortunate timing, as friends were moving house this weekend, and had asked for help on Saturday, including with the driving. Luckily the back was less bad by then, especially after a hot bath, and I coped. I even managed to mostly resist helping carry stuff ... mostly.

They had someone else to drive on Sunday, which was useful as we had tickets to a concert in Brighton that evening, quite a long drive away, to see The Dirty Youth opening for Heaven's Basement. Unfortunately, in a piece of bad timing for all concerned, that driver's wife fell ill after his first run, so I got the call early Sunday afternoon. Just one more run needed to transport the last few bits and pieces, then get the van back to Berkshire Van Hire (although the dirty great Luton was a scary beast to drive, it was a nice - and surprisingly comfortable - piece of kit). "The last few bits and pieces" - except they had managed to forget to check a room that morning, so it was the last few bits and pieces, plus a fair bit of furniture, plus all the other stuff that goes with being "90% complete".

So we got the van back quite a lot later than I'd hoped, and I was quickly picked up by BlackLin and BlackSar in our car, and set straight off for Brighton, with just about time to get there for the start of the show. But not enough time to go via home, so not enough time for me to persuade the PC to print off the map of Central Brighton which I had found. So we depended on a print-out of directions from the RAC route finder. Which had Brighton Pier a mile down the road from where Brighton Pier actually is. Which is a tad inconvenient since BlackLin didn't have the postcode of The Haunt, which was the venue, but she did know that I'd said it was just opposite Brighton Pier.

That meant we made good time into Brighton, but still ended up getting to the venue late. Which was unfortunate timing when it was the opening act we really wanted to see. We managed to see a song and a half of The Dirty Youth: the sound was really good (this time), the venue was pleasantly busy, the band were brilliant ... and we got to see them for a song and a half!

The second support act were Glamour Of The Kill, a band from Yorkshire. Wikipedia describes them as 'post-hardcore'; I'd call them generic 21st-century pop-punk. They are like all the least interesting tracks on Kerrang, whizzed up in a blender and poured out, lukewarm. This Yorkshire band sings its own songs with an American accent - how's that for artistic integrity! What really got me, though, was the drumming. Generally I like hard working drummers, and he was working hard. He was also drumming absolutely flat, on the blandest possible beat - no push, no pull, no interesting offbeats, nothing creative at all: one two three four wibbly bit wibbly bit one two three four and so on. I really didn't enjoy Glamour Of The Kill.

Headliners were Heaven's Basement. They were much more convincing: for a start they had genuine stage presence - you could tell they were the headliners. They also played their brand of modern heavy rock with energy and skill (and proper drumming). I genuinely enjoyed their set, but there was no doubt they were dinosaurs: from the posey guitarist to the "if God invited me to Heaven I'd choose Hell' woffle (Dio did it far better decades ago) to the acoustic ballad with a heavy finale, they were basically reworking ideas from the Classic Rock era, just heavier ... nothing really new. One entertaining moment was when the lead singer went off to allow the posey guitarist to sing lead on a song: the sense of presence just vanished; for all his posing he had the stage charisma of a damp towel dropped by a supermodel. Although, to be fair, he was good on guitar. At the end of their set there was no real enthusiasm from the crowd for an encore, but they gave us one anyway, as the audience slowly trickled away ... including us.

I'd say Heaven's Basement were a decent band, but anachronisms - out of time.
Posted by BlackPhi at 02:09