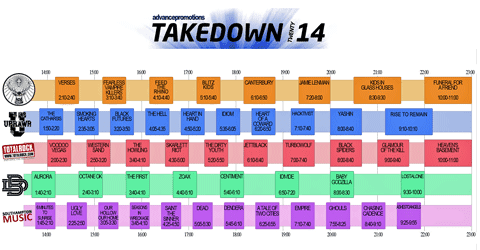 If you're going to a day-long rock festival, it's a really bad idea to be exhausted before you even start. That's the mistake our daughter and I made before Takedown 2014 yesterday, and it did mean we ended missing quite a lot, just trying to recoup our energies.

Takedown is a one-day festival, hosted by Southampton University's Student Union, featuring mostly up-and-coming rock bands. It showcased an amazing number of young bands over the afternoon and evening (click the graphic above to see the programme), for a very reasonable price.

Two bands we particularly wanted to see were The Dirty Youth - who we had never seen before, although I did help to crowd-fund the DVD of their last tour - and Dendera, who are a local Southampton band - we have seen them before a few times, but they say they are working on new material, which we were keen to see.

If you look at the programme you can see that we had a problem: The Dirty Youth were due to finish at 5:50, whilst Dendera were to start - on a different stage - at 5:45. Then The Dirty Youth hit technical problems during their sound check, so they were at least ten minutes late starting. In spite of sound problems, though, it was a really good set, which we got to see from right in front of the stage.

After the gig, BlackLin and BlackSar got their picture taken with Danni, which they were really chuffed about. We gave up on Dendera and went to the cafe, where we got to talking with some of the Dirty Youth stage-crew, and later got some posters signed by two more members of the band (Phil & Leon). So that side of the festival was really good. We'll just have to look out for the next local Dendera gig and see them there instead.

In the meantime we also got to see some bands we'd either never heard of or never seen live before. Western Sand were one I'd never heard of, although they have some decent YouTube clips so we had a look shortly after we arrived. I was very impressed: they sounded to me like a kind of 21st Century reboot of Bon Jovi; heavier and less pop. One to keep an eye out for, I think.

BlackSar was looking forward to seeing Fearless Vampire Killers, but they turned out to be a disappointment. Skarlett Riot were decent, although as another female-fronted rock band playing just before The Dirty Youth they suffered in comparison. Ghouls were fun - basically heavy Ska - although I'd had enough by the end of their set. Kids In Glass Houses were another band BlackSar had heard on TV ... and another disappointment - although by then, to be honest, we were so tired they'd have had to be really good to keep our attention. We skipped the two headline bands and went home early, shattered.

Food was poor, organisation seemed decent, the range of bands was excellent (within their target genres), and we heard some good music, so overall a very good day. Now we're all wrecked, but it was worth it.

"Rise Up, join the revolution"