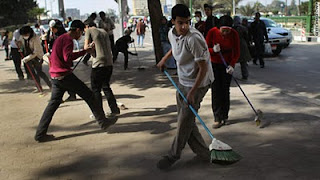 In Egypt, in Tahrir Square, there was a revolution taking place - not just a political revolution, but a revolution in the way people relate to one another. Salma El Tarzi, a 33-year-old Egyptian filmmaker who was previously not politically active, wrote:-


"I was one of many women, young and old, there. We were as active as the men. Some acted as nurses and looked after the wounded during the battles; others were simply helping with distributing water. But there were a great number of women that were on the front line hurling stones at the police and pro-Mubarak thugs.

The duties in the square were divided. We were very organised. Something changed in the dynamic between men and women in Tahrir. When the men saw that women were fighting in the front line that changed their perception of us and we were all united. We were all Egyptians now.

The general view of women changed for many. Not a single case of sexual harassment happened during the protests up until the last day when Mubarak stepped down. That is a big change for Egypt."


"I was amazed by the peoples’ determination to keep this peaceful even when we were under deadly attacks. When we caught the pro-Mubarak thugs, the guys would protect them from being beaten and say: 'Peaceful, peaceful, we are not going to beat anyone up’. That was when I started thinking: 'No matter what happens we are not going to quit until Mubarak leaves'. The spirit of the people in Tahrir kept us going ...

I have never felt as at peace and as safe as I did during those days in Tahrir. There was a sense of coexistence that overcame all of the problems that usually happen - whether religious or gender based ... We went through many ups and downs together. It felt like it had become a different society - there was one Egypt inside Tahrir and another Egypt outside.

The moment Tahrir opened up, we saw a lot of people that were not there before and there were reports of females being harassed.

I know that Egypt has changed and we will transfer the spirit of the square to the rest of the country. Before Tahrir if I was [harassed] I would refrain from asking people for help, because there are a lot of people that would disappoint you by blaming you. But I think the spirit of the revolution has empowered us to spread the feeling we established wider and wider."

Long ago, in the Bible, there is another story of a people set free, in Egypt. Those people left Egypt and went on to follow their own path elsewhere. Today the people from Tahrir Square want freedom within Egypt, liberation and healing inside their own land.

Jesus commemorated his people's freedom from Egypt, one Sabbath, by liberating a woman from 18 years of suffering. The religious authorities protested: somehow they missed the link.

Today, around the world, inside churches and outside, Jesus still brings liberation and healing. And religious authorities - some of them - still try to block him. But you can only delay liberation for so long: sooner or later God's Kingdom breaks through. Often in strange and unexpected ways: God's Spirit is unpredictable, but effective. God's Kingdom is all around us, sometimes it breaks into our lives and the lives of those we care for. Then everything changes.

I know some people in desperate need of liberation. Today, maybe this week, pray God sooner rather than later, my prayer is that the Kingdom will break through into their lives. It won't make life easy, but it will make it free. And that, I think, makes a huge difference.
Posted by BlackPhi at 14:59