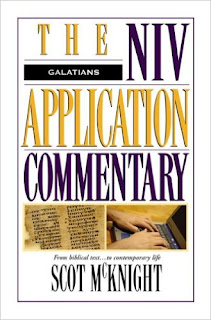 A curate's egg: something which is mostly bad but partly good.

Galatians is part of the NIV Application Commentary series, which aims to link the original context and meaning of Biblical books to modern contexts and so to the Bible's meaning for today. Last year I bought their commentary on Mark which was useful, so this year I tried Galatians. Like all NIV branded materials this series is generally evangelical in approach, but that wasn't a problem with Mark.

Galatians was written in 1991, which seems to have been just late enough to have picked up on some of the modern insights into its context (like where the Roman province of Galatia actually was, and thus the letter's link to Paul's first missionary journey), but without really working them through.

The main problem is that McKnight sees everything from his own context of late 80's US evangelicalism. This raises a sour smile when he insists that evangelicalism has lost its old legalism, but gets very frustrating indeed when he insists on using his commentary to expound his own preferred traditions and views, almost irrespective of what the text actually says.

You could see this coming from early on when he starts saying Paul doesn't really mean what he writes (about issues like following rules and authority). By the end of the book it is really wearing.

There's a classic section where McKnight bemoans that people just don't feel guilty like they used to, so how can they understand the gospel! If the gospel of Jesus can be reduced to helping people with their guilt trips, there's not much to it.

Less crudely there is his overall view that Galatians is about 'Judaisers' insisting that the Galatians need to follow what McKnight calls 'gospel-plus'. In other words that Paul has been teaching the generally accepted Christian approach but these people have come along trying to change that and add extras from the Jewish Law.

That fails to take into account that the early church was essentially a Jewish group - the vast majority of Jesus' early followers did try to obey the Jewish Law. It's not that the Judaisers were trying to add something to established practice, it's that Paul had taken something away. Paul was making changes, stripping away elements which got in the way of God's work, and his letter to the Galatians explains why.

In today's churches there is a lot of stuff which needs stripping away; a lot of crud accumulated over the centuries. But how do we do this without compromising the core of what the church is about; without throwing Jesus out with the bathwater?

The trouble with this commentary, in a way, is that embedded in this smelly matrix of tradition and opinion there are some real gems: insights which had me looking at parts of the letter in a new way. If it had all been rubbish I could happily have just given up and stopped reading.

One of these gems was a link back to the situation in Paul's home church of Antioch. Paul had been called in precisely because the church there didn't know how to deal with a sudden influx of outsiders who didn't have their background, didn't know or understand their practices, and quite likely didn't behave 'appropriately' in church.

Then there is a marvellous insight into the way the Jewish Law, Torah, had been fulfilled. It's job as the route by which people became God's people, part of his kingdom, had been fulfilled and completed by Jesus, of course, but McKnight's insight is that Torah's role as a guide to moral behaviour, for distinguishing right from wrong, is also fulfilled, this time by the Holy Spirit.

In this he also recognises that the 'fruit of the Spirit', famously described in chapter 5 of Galatians, is mostly about relationships between people, about the way a church community works, rather than the old individualistic piety approach.

Overall, whilst the good bits of McKnight's commentary are few and are embedded in a lot of rot, they are important enough that, overall, I have to consider this book worth reading. I learnt something useful from it, which is all you can ask really.
Posted by BlackPhi at 15:10