Acts 8: We Are The Others 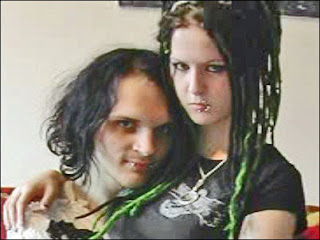 I wonder how many people have heard of Sophie Lancaster? Very few, I suspect, and those mostly either part of the goth subculture or fans of a style of music sometimes called 'gothic metal'. Sophie was a young woman who was beaten to death in a park in 2007, apparently just because of her looks (her boyfriend, Robert Maltby, who she was with, was reportedly left with brain damage). She looked different, she was an outsider, she was 'other' and so she was attacked, beaten and killed.

There is a story told in the Bible:


There was an Ethiopian, a eunuch, ... He had come to Jerusalem to worship and was returning, seated in his chariot, and he was reading the prophet Isaiah. And the Spirit said to Philip, “Go over and join this chariot.” So Philip ran to him and heard him reading Isaiah the prophet and asked, “Do you understand what you are reading?” And he said, “How can I, unless someone guides me?” And he invited Philip to come up and sit with him. Now the passage of the Scripture that he was reading was this:


“Like a sheep he was led to the slaughter
and like a lamb before its shearer is silent,
so he opens not his mouth.
In his humiliation justice was denied him.
Who can describe his generation?
For his life is taken away from the earth.”

And the eunuch said to Philip, “About whom, I ask you, does the prophet say this, about himself or about someone else?” Then Philip opened his mouth, and beginning with this Scripture he told him the good news about Jesus. And as they were going along the road they came to some water, and the eunuch said, “See, here is water! What prevents me from being baptised?” And he commanded the chariot to stop, and they both went down into the water, Philip and the eunuch, and he baptised him.

It looks like just another Bible story; I've even heard it used an example of 'how to do evangelism'. But knowing the context makes all the difference.

Here's a guy travels all the way from Africa (probably around N. Sudan) to Jerusalem to worship God. When he gets there he will have been told he's not allowed into the Temple to worship, because he's a eunuch and eunuchs aren't allowed in the Temple (strictly speaking they're banned from the 'assembly of Jahweh', Deut 23:1). He was a literal 'outsider'. So when he asks "What prevents me from being baptised," that's not a rhetorical question, more of a challenge. Baptism is how one joins this new 'assembly of God' in Jesus, and it's how someone becomes part of the Church, which is Jesus' body, which is the new Temple.

Why would this outsider, this 'other', ever think being baptised by Philip was even a possibility? The answer lies in the passage from the prophet Isaiah that he quotes; but again only in context. I deeply dislike the use of 'proof verses' - bits of Scripture ripped out of their context to 'prove' a point. One of their problems is that people then start to assume that the Bible does the same thing. Many of the early Christians will have known (what we call) the Old Testament off by heart. They would have known that the book of Isaiah is essentially a collection a passages - some short, some long - linked together. The 'sheep led to the slaughter' quote is from near the beginning of a long passage about when the Messiah comes. Toward the end of that passage it talks about eunuchs:


Let not the eunuch say, “Behold, I am a dry tree.” For thus says the Lord: “To the eunuchs who keep my Sabbaths, who choose the things that please me and hold fast my covenant, I will give in my house and within my walls a monument and a name better than sons and daughters; I will give them an everlasting name that shall not be cut off.

So, when the Messiah comes then the rules banning eunuchs will change, and outsiders like him will be welcomed and honoured. If Jesus is the Messiah, as Philip's 'good news' claims, then Jesus changes everything, especially for the 'others', the outsiders, the excluded, the different. Now they are to be welcomed into God's people ... and they are to invite and welcome others, especially the outsiders and the excluded.

According to the Bible, that is precisely what Jesus did, and what the early Church did after him. It is sad then that today's 'churches' are better known for excluding those who are different than they are for including them. Yes, there are many churches who follow Jesus in being genuinely welcoming to all, including those who are different, whose 'face doesn't fit'; but the pretend churches - really Pharisees in disguise - are louder and more often heard.

The challenge for all of us - church-goers or not - is how to welcome and show respect to those who are 'others', in whatever way:-