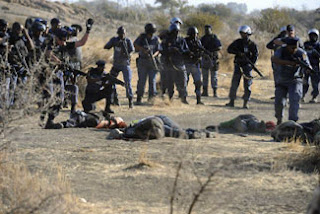 George Orwell had it right:

Or, if you prefer your cultural references musical:


Meet the new boss
Same as the old boss

Earlier this month South African police shot at a group of striking mineworkers, killing 34 and creating comparisons with the apartheid era. Yesterday, the South African prosecutors reinforced those comparisons by charging 270 of the surviving protesters with murder, using an old apartheid-era 'common purpose' law - a law which the ANC once campaigned against as unjust. That was before they got their own hands on power, of course.

Once it was a white minority enriching themselves at the expense of the (mostly black) South African people. Now, in the post-apartheid era, there is a wealthy (mostly black) minority doing exactly the same. As they say, colour is only skin deep.
Posted by BlackPhi at 11:38