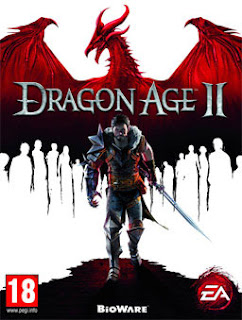 Last year I enthused (twice) about Dragon Age: Origins, the computer fantasy role-playing game. In particular I enjoyed the story-telling and role-playing aspects: the game drew me in - much as a really good book does - and engaged me deeply. Late last year/early this year I've been trying to use the associated tools to do my own story-telling, through creating short mods. It's very difficult, but fascinating.

Last weekend Dragon Age II came out. Finally we would find out: a) if Bioware could repeat (or even improve upon) the excellent FRPG experience of DA:O; and b) what happens next. The first episode ends on a mystery: you've saved the world from the evil archdemon, but the witch Morrigan leaves carrying a kind of demon-spawn/dragon-spawn child. One of the add-on packs suggests that she somehow intends this for good, to oppose her mother Flemeth's evil plans, but we won't know until Bioware continue the story.

Having spent several hours playing the early sections of DAII (and having a daughter who has completed it all), I can tell you: a) no, it's not even close; and b) we still don't know, as DAII doesn't include Morrigan or her child.

DAII moves to a new character and a new area, which I think is good: from a Grey Warden roaming the countryside, and a small provincial town, in order to defeat an archdemon and save the world; to a refugee striving to make a new life in the big city. Settings are much bigger and more detailed, with a far wider pallette of scenery, rooms, walls, furniture, etc to play with. This is good at first, except that Bioware seem to use this new scenery repetitively. Because it is more distinctive and more detailed it is also more obvious when you come across the same complicated rock formation, or layout of wooden platforms, or strange tunnel shapes again and again and again. It's a good idea but badly applied.

The new game has new, much more interesting, animations for fighting, walking, etc. Some of the fighting ones are very impressive - such as the staff fighting, or the rogue somersaulting into attack - some of the walking and standing ones are less so - such as the main character's sister whose animations appear to be based on a streetwalker. Again, though, these good things have been applied badly. At the same time as making the fighting animations longer and more complex, they have also made them take less time. So the staff fighting moves completely lack any sense of weight or momentum, and the somersaults just make movement fiddly and unclear. Combat visuals that could and should have been awesome become simply awkward.

The quest structure, at least in the early phases of DAII, is similarly fiddly and uninvolving. In DA:O you basically had one big quest, broken down into six sub-quests, plus an assortment of small side-quests. Side quests associated with your companions might have a certain amount of depth, whilst the others were essentially trivial go-fights. In DAII, at the beginning you just follow the path fighting darkspawn every now and again. Then you get taken to the city of Kirkwall and you have to make a choice of who to work for for a year: mercenaries or thieves/smugglers. This seems like it should be an important choice but then the story skips that year and you are out on your own. There are a few small quests come from your old employers, but it doesn't really seem to make a difference. In part that is because the quests themselves don't seem to matter that much. There are basically three types of quest: those where you find some random object and take it back to its owner (whose location you magically know immediately); those where you fight your way through assorted opponents to a location; and those where you go to a location and several waves of nasties attack you. There are lots of these quests, none of them seeming of any particular importance except as a way to get money, in a quest mechanism which groups them by location rather then theme, making it all seem very artificial. I gather that the quests get better as you go further into the game, though.

Companions and their dialogue were a constant source of interest in DA:O; in DAII it is purely functional. They basically only talk to you if they want you to do something; even then they will only talk in specific places. Otherwise you just get a stock response floating above their head. When you do have conversations then your side of the conversation is dumbed down to (generally) a nice response, a flippant response and an aggressive response. These are carefully indicated by symbols and a two or three word summary, but they don't even tell you what your character will say if you click on one. Your character's lines are actually voiced in DAII, which they weren't in DA:O, but that is less of a benefit than it might be as I find the voice used rather irritating.

In summary then: my initial impression of Dragon Age II is that it looks fairly pretty (although less so than, say, 2006's Oblivion) but it fails to engage me. Whereas Dragon Age: Origins was really good at drawing me in and involving me in the characters and the story, Dragon Age II is more about pushing me away to follow as a disengaged observer. Some people consider character statistics and complex skill trees and the like key to CRPGs; I consider the role-playing aspect (which is the 'RP' in 'CRPG') most important: being drawn into the game through engaging character relations and an involving story, and being immersed in the game environment. DAII, at least in its early stages, specialises in de-immersing.

It's not a bad game, to be fair, just not a very good one: Bioware have simply cut too many corners and made too many compromises in Dragon Age II.